If you’re starting a nonprofit organization you probably have some ideas about how you’ll raise enough money to stay afloat. That’s good because you’ll need to work these into your business model and budget early on. As often as not, newbies to the nonprofit world make assumptions about how money is made that don’t quite match reality.

Many people assume they’ll spend their time writing grants, sending out fundraising mailings, or putting on big fundraising events, and in the nonprofit world all these are activities you are likely to become familiar with, but the story doesn’t end there. 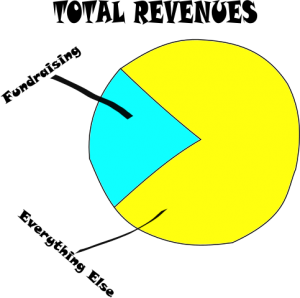 There are several other ways to raise money, and these are prevalent in the nonprofit realm. Some organizations have a built in source of revenue. For example, Goodwill has a chain of Thrift Stores as do many smaller nonprofits. Museums and arts organization often have ticket fees, and there are a number of other models where the activity your organization is engaged in has a natural source of cash tied to it. But very often these earned incomes are unavailable or at least need to be supplemented by contributions of some sort. That is people or organizations need to give you money outright. Let’s differentiate then between generating revenue (broadly speaking) and fundraising specifically.

Across all nonprofits as a whole, less than a quarter of the money comes from fundraising. Most of the rest comes in the form of fees for services which could be individuals paying for those admission tickets or buying or services items from you, or it could come from government contracts to do your work. Of the fundraising money, 73% came from individuals, 42% from foundations, and under 5% from corporations. (Bequests made up the balance.*)

Each nonprofit is different though. Religious organization skew toward individual giving. Medical nonprofit skew toward fees for services. You nonprofit will have its own unique recipe for staying afloat financially, and it’s a good exercise to figure out what other nonprofits working similarly to yours are doing to make ends meet. In a lot of cases this will involve some component of fundraising. 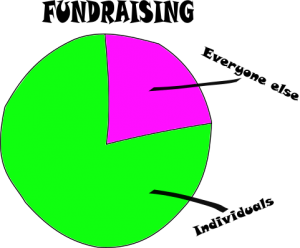 So are we talking about grant writing, raffles, galas, and that sort of thing?

I am not a fundraising expert, but I’ve spent more than four decades in nonprofits, so I’ve learned a few things by osmosis. I’ve noticed that a lot of people jump right to the fundraising event type of solutions and in doing so they skip over a very basic and fundamental fact. In its simplest form, fundraising in a nonprofit goes like this:

The easiest way to raise money for your nonprofit organization is to just ask for it. Click To Tweet

There’s more to it than that, of course. It’s important to have thought through why people support your idea and be able to talk about it persuasively. For example, you need to be able to demonstrate a need and also how your organization is addressing that need. You need to be able to talk about this both logically and emotionally. You need to demonstrate that you’re competent at doing the work needed and that you’ve thought everything through. You also need to think about cultivating an ongoing relationship with your supporters and finding ways to increase their commitment through your relationship with them. This involves psychology and salesmanship and finding appropriate ways to express your gratitude for their contribution.

But at its heart, fundraising is really that three step process (do something good, talk about it, ask for support). In my experience, nonprofiteers have little trouble committing to the first two points. 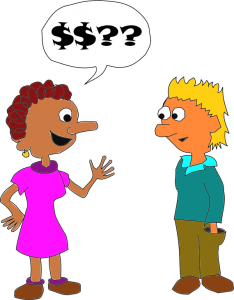 Many people are uncomfortable asking people for money directly. In fact, I think a lot of folks just don’t like to talk about money at all. (I know I’d rather get it and spend it than talk about it.)

We need to get over that.

It’s usually  people’s awkwardness with money that makes them avoid asking others for it, and that’s probably what leads them to prioritize grant writing, events, and direct mail. These strategies avoid the direct ask and so avoid the awkwardness. But if you want these more comfortable approaches to succeed, you will likely need to demonstrate that you have supporters, and the direct ask is how you build that evidence.

So you gotta ask people for money. After you’ve done this a few times (and been rejected a few times) you’ll see some success. Do it enough and you’ll be in a position to demonstrate your community’s support for your work. This helps in countless other ways. For example, those grants you want will be a little closer to reality. Getting prime donations for a silent auction will be easier. And you’ll have a list of supporters that can help you sell tickets to that gala.

Who knows, one of those donors might not be afraid to ask their friends for contributions. If so, pay special attention to that one. She’ll be a big help.

See the Grantspace Knowledge Base (2014) numbers, and this document.

Sign up for informative weekly posts and receive a complimentary copy of Playing the Nonprofit Startup Game. This includes access to instructions for printing your own copy of the game.
Nonprofit Bookkeeping: What to Look For Need to Research a Nonprofit? Here’s How
Scroll to top